Seborrheic dermatitis, a type of skin condition that most often causes facial dryness and scalp itchiness, affects about 6 million children and adults in the U.S. It can be tricky to recognize or diagnose seborrheic dermatitis because the skin reactions it triggers mimic those caused by similar conditions like psoriasis, other forms of eczema, or even allergic reactions.

Like many other conditions caused by abnormal immune responses, patients tend to experience on and 0ff intervals of seborrheic dermatitis symptoms, meaning most have episodes of skin reactions suddenly flairing up and then periods when they go away. It’s been reported by patients with dermatitis that outbreaks are triggered by factors like: (1)

What Is Seborrheic Dermatitis?

Seborrheic dermatitis (SD) is defined as a chronic, recurrent, inflammatory skin condition characterized by erythema and skin flaking. Seborrheic dermatitis is a form of eczema and usually causes symptoms like itchiness, skin dryness or oiliness, and other common changes in skin texture, such as scalp dandruff. Symptoms most often appear on areas of the skin that normally have high concentrations of sebaceous glands, meaning they tend to be oily. The areas of the body most likely to develop itchiness and other symptoms are:

Something that makes seborrheic dermatitis unique is that it can cause both extra skin dryness and oiliness. In fact, surprisingly, oily skin is one of the most frequent causes of dandruff and sometimes also contributes to other skin irritations (like infections or acne). SD is marked by red, greasy skin covered with flaky white or yellow scales, making it different from conditions like psoriasis.

The most common signs and symptoms of seborrheic dermatitis are: (2)

SD also affects a high percentage of infants (around 70 percent) and sometimes children. In fact, cradle cap is one type of SD. Most often in infants, the condition generally resolves by age three or four months, however children with untreated food allergies can sometimes continue to show symptoms for years. (3) Another time period when SD tends to develop is during puberty, when hormone shifts can affect the glands of the skin and oil production. Dermatitis prevalence increases again in adults over the age of 50. 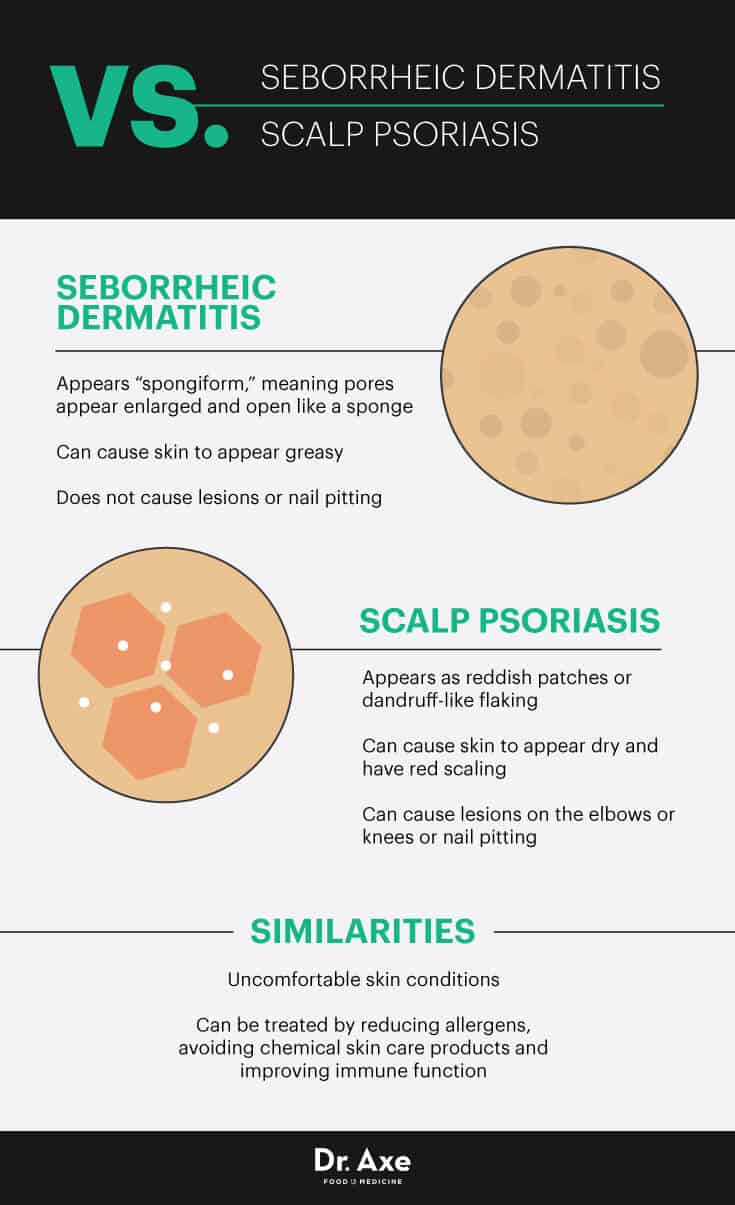 Although experts still aren’t totally sure why dermatitis develops, it appears to be related to the composition of the skin’s sebaceous gland secretions, the proliferation of Malessezia yeasts that can cause negative skin responses and abnormal immune responses.

Sebum is the component of skin’s surface that produces oils (lipids) to keep the skin adequately hydrated. It contains high amounts of squalene, wax esters and triglycerides that normally prevent dryness. Research suggests that people with dermatitis might have close-t0-normal sebaceous gland activity, however changes in the composition of the skin’s surface — coupled with a hyperactive immune system — might trigger abnormal responses to microbes on the skin.

Immune responses increase as there’s also a higher growth rate of lipid-dependent microorganisms, including yeasts. Malassezia yeasts are normally present on the skin in sebum-rich (oily) areas of the body, such as the face, scalp, trunk and back, but in people with SD they appear to be produced at increased levels and in the process leave behind byproducts that cause skin irritation and inflammation.

It’s been found that seborrheic dermatitis commonly occurs among patients with other health conditions that affect their immune systems and raise inflammation.

Examples are HIV (human immunodeficiency virus), autoimmune diseases, food allergies, mood disorders, recurrent infections or neurological disorders like Parkinson’s disease. SD is especially common in those with severely compromised immune function, affecting approximately up to 11 percent of immuno-competent adults and up to 85 percent to 95 percent of HIV patients. (4)

Even in people who don’t have other serious health conditions, risk factors for dermatitis include dealing with significant life stress, experiencing trauma, low exposure to sunlight (resulting in possible vitamin D deficiency), or going through hormonal changes, such as pregnancy or menopause.

One treatment that dermatologists commonly use to control SD symptoms on the face and scalp is ketoconazole cream, usually about 2 percent concentration applied twice daily for four weeks. This amount has been shown to be as effective as hydrocortisone 1 percent cream for reducing redness, flaking and other signs of irritation. (5)

Dandruff (the shedding of excessive amounts of dead skin flakes from the scalp) is very common in both adults and children, but this doesn’t mean it’s entirely “normal.” Studies suggest that dandruff is really the overaccumulation of dead skin, and dandruff causes can include low immune function, reactions to the dry winter air, a vitamin-deficient diet and harsh chemicals found in things like chemical-heavy unhealthy shampoos. Malassezia yeast lives on the scalps of most adults but in excess can cause more skin cells to grow and then skin cells to die and fall/flake off.

Common seborrheic dermatitis scalp treatments that you can try include:

As described above, low immune function and high inflammation levels (sometimes in combination with hormone imbalances) are at the root of most skin conditions. Skin irritations are often caused or at least made worse by chronic stress, depression, anxiety and fatigue. To improve overall immunity, try following these tips:

To help keep inflammation as low as possible, it’s important to stick to keeping your diet as unprocessed as possible, focusing on eating whole foods. Minimize your intake of packaged and processed foods known to worsen autoimmune reactions and allergies, including:

Be sure to supply skin with enough hydration by drinking plenty of water throughout the day. Avoid having too much salty food, alcohol, caffeine or sugary drinks, which can aggravate and dry out the skin, instead having things like coconut water, green tea, and homemade smoothies or juices to increase fluid intake.

5. Use Healing Coconut and Essential Oils

Because real coconut oil contains medium-chain fatty acids, including lauric acid and capric acid, it has strong antiviral, antimicrobial and antifungal properties. Coconut oil applied to the skin has been shown to help reduce excess yeast, microbes and fungus that can lead to irritation, too much oiliness or dryness. Even better, use coconut oil on the skin along with soothing essential oils — like cedarwood oil, lemongrass, rosemary, tea tree and lavender.

To make a homemade treatment for scaling, itchy skin that you can keep at home to use several times, combine eight drops cedarwood, eight drops rosemary oil, six drops tea tree oil, one teaspoon local honey and four ounces coconut oil (or olive or almond oil). Massage onto the affected area, including the scalp, leave on for about 15–20 minutes, and then gently rub or rinse off. These oils contain antiviral, antibacterial and antifungal properties, much like coconut oil, and they can reduce inflammation and treat infections.

Symptoms of dermatitis are likely to be made worse when you apply chemical-heavy products to your skin on a regular basis. Itching, picking and over-cleaning the skin might also make things worse. (6)

Use natural, organic products on your skin as much as possible, being careful to especially avoid commercial shampoos with chemicals if you have dandruff. Most beauty products contain chemicals that are drying or harmful, so look for those made without ingredients like parabens, sodium laureth or lauryl sulfate. Instead, to clean, tone and hydrate the skin without irritation turn to natural skin care products like apple cider vinegar, tea tree, witch hazel, shea butter and aloe vera gel. It’s also important to avoid other causes of contact dermatitis, including:

Experts warn that because dermatitis tends to be chronic, patients should be made aware that seborrheic dermatitis is usually recurrent and that the condition may cause outbreaks of symptoms from time to time even after successful treatment. Rather than simply assuming your symptoms indicate SD, it’s important to visit a dermatologist to get an accurate diagnosis, since this helps with treatment.

Your doctor will be able to make a differential diagnosis between SD and other conditions like psoriasis, rosacea, Demodex dermatitis, atopic eczema, pityriasis versicolor, contact dermatitis and tinea infections. Knowing the specific type of skin condition you have, as well as what the underlying causes are, will keep symptoms from worsening or causing other untreated immune reactions.

Read Next: How to Get Rid of Dandruff — 9 Natural Remedies