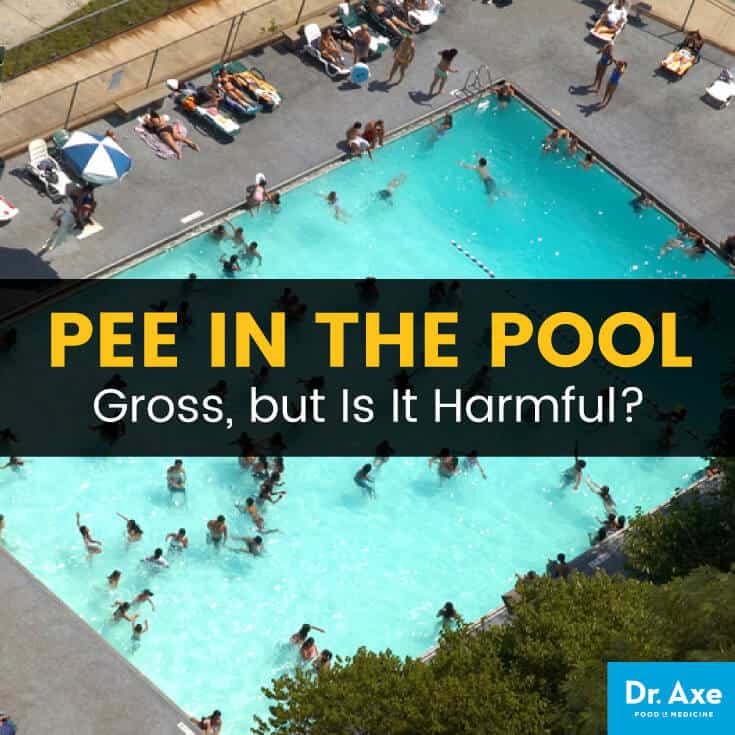 Have you ever thought about the health effects of pee in the pool? Let’s back up a second. Have you ever peed in a pool? Though you might not raise your hand, chances are that have you before ­— and all of the urine can be pretty darn harmful.

Researchers at Canada’s University of Alberta developed a sneaky test to determine how much urine is actually in  swimming pools. They tested for the presence of artificial sweeteners, specifically acesulfame potassium, to determine urine levels floating around in the pools. Fake sweeteners commonly found in processed foods, gum and drinks aren’t fully metabolized by the body, meaning they’re easily detected in urine. (Just another reason to avoid ultra-processed foods!) (1)

Using this sweet research technique, the scientists discovered that over the course of three weeks, two swimming pools in Canada accumulated a whole lot of pee. The first, larger pool, contained about 110,000 gallons of water. But another 8 gallons? That was urine. The second, smaller pool containing 220,000 gallons of water registered positive for 20 gallons, or 75 liters, of urine.

Needless to say, there are a lot of bathroom breaks happening in pools.

But aside from the terrible mental image of swimming in a pool of strangers’ urine, does it really matter if there’s a little pee in the pool? After all, urine is pretty sterile. The trouble, however, isn’t with urine, per se. It’s what happens when pee and the chemicals used to treat pools meet.

Nitrogen-containing compounds, like uric acid and ammonia, often react with pool disinfectants. They end up forming byproducts and contaminants which are harmful to our bodies. (2) One of the most common ones is trichloramine. This compound irritates the eyes and lungs but, with repeated exposure, can be even more dangerous. People who are constantly interacting with pool water and are exposed to trichloramine, like professional swimmers and pool workers, were found to have an increased risk of asthma and suffered from more upper respiratory symptoms than the average joe. (3)

You don’t need to be the next Michael Phelps to have encountered these compounds when you’ve been in a public pool, either. If you’ve ever had red eyes or a runny nose after your swim, surprise! It’s not from the chlorine, as people usually believe; it’s actually the chemicals mixing with urine and all the other bodily fluids that people leave behind in a pool, like sweat, dirt and poop.

Wait, poop? While (hopefully!) no one is pooping in your local pool, tiny germs, including Cryptosporidium (aka “Crypto”), E. coli and norovirus germs, can be released in the water from a person’s body if they have diarrhea or have had it in the last two weeks. All it takes is someone swallowing a gulp of water for another person to become infected and sick. And it happens often; according to the Center for Disease Control and Prevention (CDC), diarrhea is the most common recreational water illness. (4)

All of those germs swirling around in the pool are also a likely cause of swimmer’s ear.

Swimming is an awesome way to get your exercise in, particularly if you have any injuries, as it’s low-impact. But no one wants to wind up with diarrhea, red eyes or asthma from doing laps! So, if you don’t have your own pool and need to hit the local one, what can you do to protect yourself?

For starters, good hygiene starts with ourselves. While it seems like a drag, you should always shower before jumping in — just a 1-minute scrub will do it, according to the CDC. (5) This ensures you’ve rinsed off the sweat, dirt and anything else that’s on you before hitting the water. If you know that you’ll be swimming later that day, you might also want to avoid using fragrances and body lotions beforehand.

Before getting in, take a good look and smell of the pool. A clean pool should have little-to-no chemical smell and, even on the deeper end, you should be able to clearly view the bottom of the pool. Don’t be afraid to ask when the pool was last treated and how often it happens, either.

If you’ve been recently sick with any type of stomach bug or diarrhea, do your neighbors a favor and skip the pool altogether!

If you’re taking little ones swimming, take a bathroom break at least every hour to make sure they don’t go in the pool. And if kids are still wearing swim diapers or swim pants, check them relatively often. These can can hold solids in for a bit, but they’re not leak-proof. If anything is a little liquidy, or you wait too long to change the diaper, poo might have already escaped, putting others at danger for illness.

Finally, it should go without saying, but use the bathroom instead of peeing in the pool!

Final Thoughts: Health Effects of Pee in the Pool