Pickled Herring: The Omega-3 Powerhouse that Supports the Heart & Mind Do you generally stay away from canned fish? Typically, that’s a good idea, since many canned fish are fish you never want to eat. But once you hear about the incredible benefits of a European staple food known as pickled herring, you’ll realized all fish is not created equal.

Similar to sardines, this small but strong-tasting fish has a huge supply of omega-3s and vitamin D that boast a ton of health benefits, including a potential decreased risk of cancer and heart disease.

This unassuming, shiny fish has inspired some enough to use it in works of art — so I think you should stick around and find out just what makes pickled herring so incredible.

Eating pickled herring may actually help you maintain a healthy heart. The leading cause of death for adult men in the U.S. is currently coronary heart disease, which is generally related to poor nutrition and treated with dangerous medications that come with intense side effects.

Fortunately, pickled herring is one food that can help reduce your risk of heart disease. Because of the presence of polyunsaturated fatty acids in herring, it’s a preferred source of protein over red meats like beef for people concerned with their risk for heart disease. (1)

One important heart-protecting asset of pickled herring fish is the high occurrence of omega-3 fatty acids, which lower high triglyceride levels. Triglycerides are a type of fat in the blood that are required to stay within certain levels in order to protect the health of the heart. These omega-3s can also help reduce reduce high blood pressure in large doses in addition to reducing your risk of heart attack and arrhythmia. (2) Herring even helps lower cholesterol.

The high presence of vitamin D and selenium in pickled herring is other ways it protects your heart. Vitamin D deficiency affects up to 90 percent of people in the United States, and it’s linked very closely with the occurrence of heart disease. Low selenium levels are also associated with heart disease. (3)

2. Acts as an Anti-Inflammatory

Inflammation is a huge problem in Western society because so many people are used to eating foods that contribute to chronic inflammation. That inflammation is at the root of most diseases. It’s also responsible for pain in several conditions, including non-specific neck and/or back pain.

In one study, researchers found that people suffering from back and neck pain found similar results when treating the inflammatory pain with ibuprofen or omega-3 supplementation. (4) Eating anti-inflammatory foods like pickled herring can help decrease pain-causing inflammation because of the presence of omega-3s, as well as the high amount of selenium, another anti-inflammatory nutrient.

Omega-3s also impact your mental health very positively. There’s a lot of scientific evidence pointing to an association with high omega-3 intake (coupled with the proper ratio of omega-3 to omega-6) and decreased levels of depression. One reason this method of treatment has been studied more recently has to do with the high prevalence of health problems connected to psychotropic medications, including a high rate of smoking, obesity and heart problems as side effects. (5, 6)

Although it’s not been well-accepted as a primary treatment method for ADHD or other related neurodevelopmental diseases, the omega-3s like the ones in pickled herring are considered a complementary treatment for these disorders as well. Omega-3 intake shows a significant impact on decreasing symptoms of these disorders without the side effects of medications. Some research even reflects an improvement in the academic performance of children whose diets were well-supplemented with omega-3s. (7)

Vitamin D also plays a role in preventing and managing brain dysfunction. Although the method is unclear, it seems that high levels of vitamin D and omega-3s increase serotonin release, reducing the severity of several disorders, including ADHD, bipolar disorder, schizophrenia and impulsive behavior. (8)

Perhaps because of this same function, vitamin D has also been shown to regulate mood, improve concentration, and aid memory and learning. Also related to mental health, and of great concern in the aging process, is the way omega-3 fatty acids have the potential to defer or slow the onset of Alzheimer’s disease. This seems to be related to the ability of omega-3s to reduce overall inflammation. (11)

High levels of vitamin D, like those found in pickled herring, also aid in the slowing of aging. Vitamin D is an important part of keeping bones healthy for a long time and helps stave off the occurrence of osteoporosis and other bone density disorders.

Selenium, as well, is thought to aid in longevity. Although it is a trace mineral and not much is needed, the body flushes it very regularly, requiring the regular consumption of it in order to reap its benefits.

5. May Help Decrease Risk of Cancer

A well-known risk factor for breast cancer is the prevalence and ratio of omega-3s in a person’s diet versus omega-6 levels. Both acids are important in many bodily systems, but the ratio of 3 to 6 should be somewhere around 2:1. Most people on Western diets get far too many omega-6s but not enough omega-3s.

This ratio in certain tissue types is what’s called a “biomarker” for breast cancer risk. Higher levels of omega-3s are associated with lowered risk of breast cancer. This finding is also significant because this tissue marker is reversible with a dietary adjustment. (12)

People with a high intake of vitamin D also reduce their risk for colon and prostate cancer, so herring fish can go a long way in helping you prevent these diseases as a strong cancer-fighting food. (14)

The process of pickling herring has been a popular method of preparation and serving for many centuries, and although this tart fish’s flavor is somewhat an acquired taste, there are incredible benefits to taking the leap.

One ounce of Atlantic pickled herring contains about: (14)

How to Pickle and Serve Herring Fish

Today, pickled herring, already ready to serve, is available in jar form, much like you would find a jar of pickles. However, there are many who prefer to do the pickling themselves.

Essentially, if beginning with totally fresh herring, you can create a brine of salt water to submerge the fillets in overnight. Then, you can create a pickling solution that generally includes water, sugar, vinegar and various spices (which change depending on the recipe).

After boiling and cooling the pickling liquid, you can place the chilled herring in a glass jar, along with flavoring foods, such as lemon and onion, then pour the liquid over them. Wait at least one more day to eat, and you can refrigerate your pickled herring about three to four weeks.

Interested in trying a herring snack? This Scandinavian recipe might be just what you’re looking for. Try this hors d’oeuvre of pickled herring on potato slices and garnished with red onion and dill at your next gathering.

If you’re going for something a little more adventurous, you may want to have a shot at this Raw “Ravioli” Recipe that uses turnip slices and pickled herring to create a ravioli-type dish you’re going to love.

Many people today are rightly concerned about overfishing and unhealthy mercury levels found in some type of fish. However, when you’re talking about pickled herring or anchovies, you can rest assured that you’re making a responsible choice.

Herring has a very low mercury level in comparison to most fish, coming in at only 0.04 milligrams of mercury per kilogram of fish. The United States allows up to 0.3 milligrams of mercury to be considered safe, much more cautious than the standard set by the World Health Organization. (15)

The sustainability of herring is also monitored closely. This fish is not farmed but rather wild-caught in most circumstances, and therefore you aren’t in much danger of losing the high value of their omega-3 acids, a common problem when eating farmed fish. (16, 17) 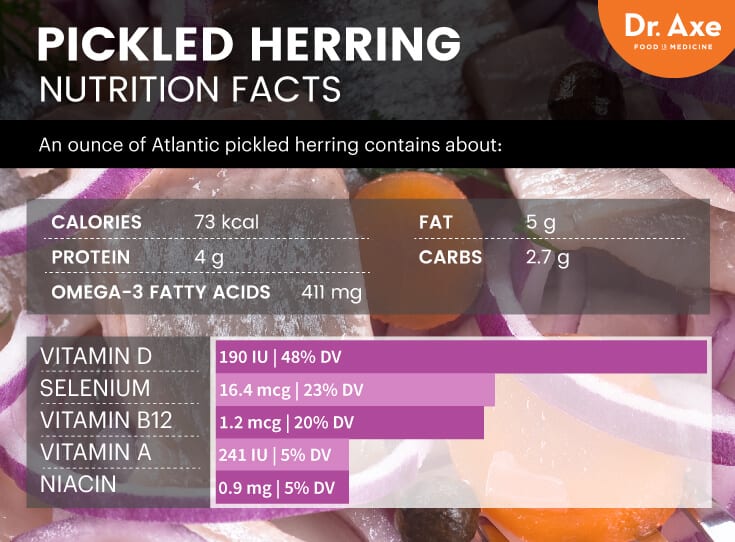 Pickled herring has been around for quite some time and actually appears in various works of art throughout the centuries, including this painting, created in 1891.

The catching and pickling of herring fish began during Medieval Times and is still practiced throughout much of Europe today. Herring is also available in the United States, but it’s far less common and not a regular part of the diet for most Americans.

Depending on where you are, people even eat pickled herring differently. Find yourself in Holland? Like the Dutch, feel free to dangle the pickled herring into your mouth. However, if your travels find you in Russia, Poland or the Ukraine, you’ll blend in better by chopping up the fish and serving it with beets and mayonnaise. In Scandinavia, it’s more common to enjoy pickled herring on rye bread, and many of Jewish descent living in New York City tend to enjoy the fattiest version of this strong-tasting fish. Because of its popularity within the Jewish community, pickled herring can often be found at social and religious gatherings — and on the menus of kosher restaurants. (18)

Residents of Poland, Lithuania and the Ukraine serve pickled herring as a Christmas Eve specialty. Scandinavians prefer to enjoy it for New Year’s Eve.

Potential Side Effects and Medication Interactions

Pickled herring is not a highly allergenic food, but there are known cases of histamine toxicity reaction from poorly stored and refrigerated herring. This “fish poisoning” can cause red, swollen and blotchy skin; headache; and gastrointestinal pain symptoms. (19)

As previously mentioned, herring fish is not to be consumed by people on MAOIs for depression or other disorders, as the tyramine contained in it can cause adverse reactions.